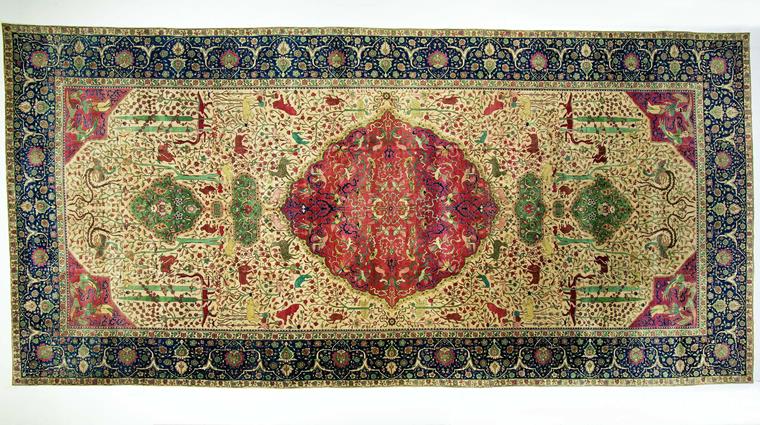 The German company Petag, short for  Persische Teppich-Gesellschaft Actiengesellschaft , was founded in Berlin in 1911. Under the inspired leadership of Heinrich Jacoby a large workshop was opened up in Tabriz (North-West Iran). The different qualities derived their name from the density in the knots : Pertovi, Hamajun, Teimuri, Rustem and Cyrus. The workshop in Iran was closed down in the forties.
Jacoby’s aim was to fight the decline in quality resulting from high commercialisation in production caused by Western demand.
The result was excellent due to the use of strong and shiny wool and skilfully made vegetal dyes the company succeeded in reviving old and opulent designs from the 16th and 17th century.
The pattern of this carpet was originally the designe of twin carpets made between 1520-1530 CE in Safavid Persia. One of them was part of the Bode collection. During  WWII it was stored in the basements of the Alte Münze (Berlin), but was destroyed during bombardments in March 1945. The other piece received the name “coronation carpet” when it was part of the decoration in Westminster in 1902 during the coronation ceremony of King Edward VII. It is now in the Los Angeles County Museum of Art.
Heinrich Jacoby remains an authority in the world of the Oriental carpet. In 1923 he published “Eine Sammlung orientalischer Teppiche”and in 1949 “ABC des echter Teppichs”. He also contributed to Arthur U. Pope’s massive work “A Survey of Persian Art” by supplying the section “Materials used in the making of carpets”.
An American missionary working in the area writes the following about the Petag-workshop in 1913 :
“This year brought a good thing to the poor people in Tabriz. A German firm opened up a carpet workshop, creating employment for a lot of people from  town and the neighbouring villages. We are getting used to the sound of the steam whistle, calling the workforce in the morning and liberating them at noon and at night. And better still, we hear  this sound six days a week, remaining silent the seventh, this way allowing employer and employees to observe the Christian day of rest.”
The Petag-rugs distinguish themselves by the shintamani-sign that is (very discretely) knotted in each piece.