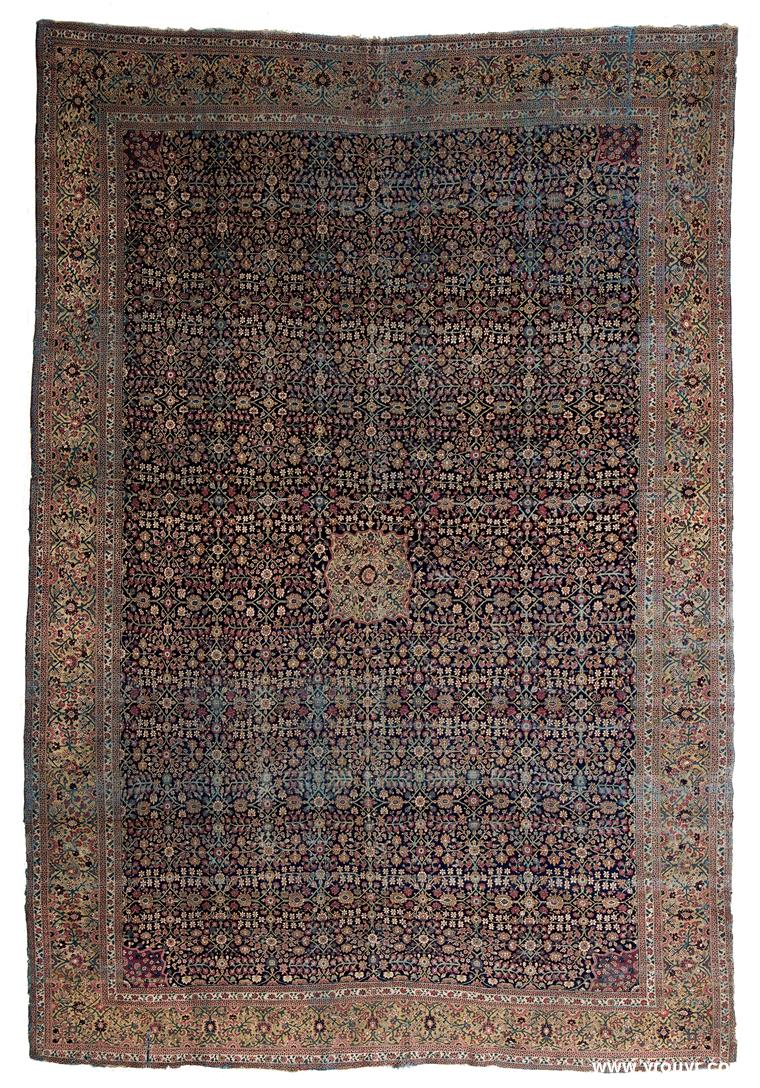 Made in pashmina wool, this extremely fine Moghul carpet dates from the first half of the 18th century. The traditional 'mille-fleur'pattern relates this piece to a few other Moghul carpets from that period. Mughal also spelled Moghul or Mogul any of the handwoven floor coverings made in India in the 16th and 17th centuries for the Mughal emperors and their courts. Aside from patterns in the Persian manner, a series of distinctively Indian designs were developed, including scenic and landscape carpets; animal carpets with spirited chases backward and forward across the field; elaborate architectural latticeworks in the Italian manner, with floral content; and several magnificent prayer rugs with a prominent central flowering plant. Characteristic of the floral patterns is common use of trailing blossoms such as wisteria or elongated bunches of grapes. Many carpets, including a series of prayer rugs that may have been produced in Kashmir, have densely packed millefleur patterns and are possibly of a later date. Fine-quality Mughal carpets, with the warp in bands of contrasting colours and with pile of such extremely fine wool that it is sometimes taken for silk on a silken foundation, have the tightest and most delicate knotting found among antique Orientals. The prayer rugs with a central flowering plant motif, for example, have approximately 2,000 knots to the square inch (300 per square centimetre), and a fragmentary lattice rug in the Textile Museum in Washington, D.C., has more than 2,500. Most Mughal rugs, however, have a foundation of cotton. Mughal carpets are thought to have been made in Lahore, Agra, and perhaps Fatehpur Sikri. One of the most notable is the Girdlers' Carpet, in Girdlers' Hall, London. (Encycl. Brittan.) PASHMINA According to the Oxford English Dictionary, pashm, from the Persian word for "wool," refers to the underfur of certain Tibetan animals, particularly goats, commonly used for the making of shawls. We used a print edition of the esteemed dictionary, since an online edition won't be available until next year. In contrast, pashmina, as we've seen it on the Internet and in fashion magazines and mail-order catalogs, is a textile blend of silk and cashmere.