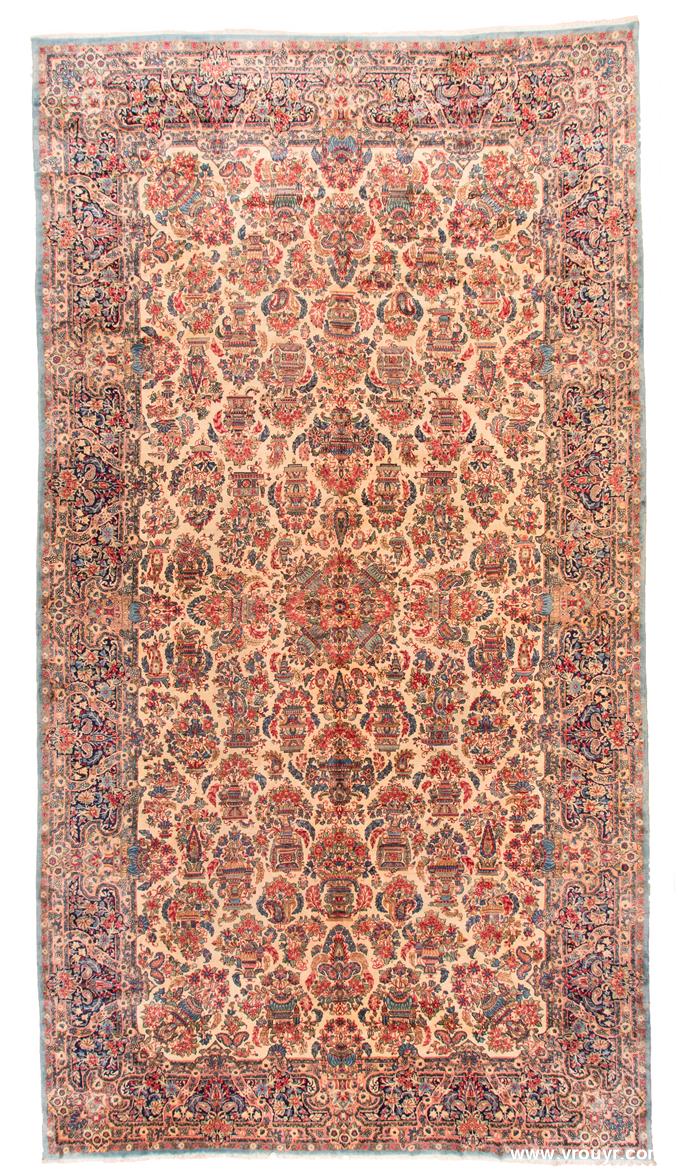 Kirman is an Iranian city with a glorious past. Located on the ancient caravan route to India, near the great desert (Dasht-e-Lut), it became a refuge of the Zoroastrians. The city was spared the ravages of the Mongol invasions thanks to its difficult access. While at the end of the rule of the Safavids (first quarter of the 18th century) most Persian cities were badly hit by the devastating  Afghan invasion, once again Kirman was spared general destruction. But political entanglements surrounding the power struggle between Lutf'Ali Khan, last ruler of the Zand dynasty, and Aga Mohamed brought down the prosperity of the city. In 1794 the city was sacked and partly razed to the ground after a long siege by Aga Mohamed. His successors never managed to restore the region's prestige of yesteryear.
Kirman has widely contributed to the fame of the oriental rug. The graceful floral patterns and extremely refined designs conquered the world and contributed to the strong reputation of Persian rugs. The revival of the carpet trade in Kirman owes much to traders from Tabriz and certain Western firms that settled in the region at the end of the 19th century. They strongly influenced the production by requesting new patterns that were very popular in Europe and America. The goods were first sent to Tabriz, then to the Ottoman  port of Trabzond, where they were shipped to Constantinople and Europe. The first Western company to set up a workshop in Kirman was the Eastern Rug and Trading Company of New York (later acquired by Fritz and Larue). A significant school of Kermani designers with a well-established reputation has emerged. The designers have opened up to innovation by developing a sumptuous style which also aims to meet the expectations of the Western market.